Who is Arthur Murray?

Arthur Murray was a great American dance instructor and also an important businessman. He was born in Galicia, in 1895 under the name of Arthur Teichman. Two years later, he was brought to America by his mother, Sarah, and settled in the East of Manhattan, together with his father, Abraham Teichman. Murray was a shy child who admired and loved dancing. When he was 14, he learned his first dance steps from his friend, Joe Feingenbaum. Shortly afterwards, dance turned into passion and in 1912 he started to teach at Grand Central Palace, a private dance studio in New York, where he won his first dance competition. Talented as he was, he learned quickly and until 1914 he managed to become the most appreciated teacher of elite society and changed his name to Arthur Murray. Thus, he became the American symbol of entrepreneurial success and ballroom dance.

In 1920, Murray organized the first radio broadcast of live music for dancing in the world. In this way, he also met his famous partner, Kathryn Kohnfelder, whom he married in 1925. 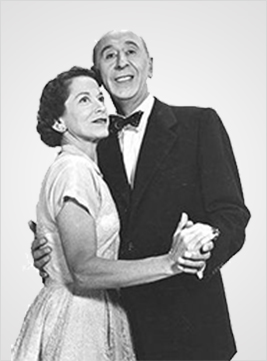 The symbol of ballroom dance

After a period during which he taught dance lessons by mail ‘Learn to dance at home’, Arthur Murray opens together with his wife the first dance studio in New York.

During the ‘30, the Arthur Murray dance studios offered numerous dance styles, exciting and loved by the general audience. Among them were ‘Lambeth Walk’ and ‘Big Apple’, two dances which brought Arthur Murray popularity and promoted him as representative of the largest chain of dance studios worldwide. In 1938, the first official franchised dance school opened.

In 1950, Arthur Murray purchased 5 fifteen-minute television spots on the famous CBS. This gives birth to ‘Arthur Murray Dance Party’, a television show hosted by himself and his wife, Kathryn. This was broadcasted for 12 years, being loved and watched by millions of viewers

Two years after the television shows ended, Arthur Murray and his wife retired, they sold the company to a group of business partners and a new era was born. Under the new management, Arthur Murray Francized Dance Studios kept up with the changes and continues to develop nowadays as the largest dance school in the world.

The dance teachers within the Arthur Murray studios can be found both in great screenings of Hollywood movies and behind many Broadway musicals. Movies such as ‘Dirty Dancing’, ‘Dirty Dancing II’, ‘Dance With Me’, ‘Beautician And The Beast’, ‘Flash Dance’, ‘An American President’, ‘True Lies’, ‘Saturday Night Fever’ and ‘Scent Of A Woman’ are just some of those for which the Arthur Murray teachers prepared the dances, taught the stars how to dance or danced themselves in the movie.

The name of Arthur Murray Dance Studios appears regularly in the most prestigious magazines, such as: ‘Vogue’, ‘Martha Stuart Wedding’, ’Smithsonian’, ‘Sports Illustrated’, ‘Woman’s Day’ and many others. Whenever the advertisement agencies want to reach the consumers with a deep love message or a funny message, you will see dance steps learned in the Arthur Murray studios, from the Gap commercial named Khaki Swing to the M&M dance.

From the first studio opened in New York and up to now, Arthur Murray Dance Studios extended gradually and now owns dance studios all over the world. It is the second old franchise in America and it is worldwide known as a prominent entertainment company.